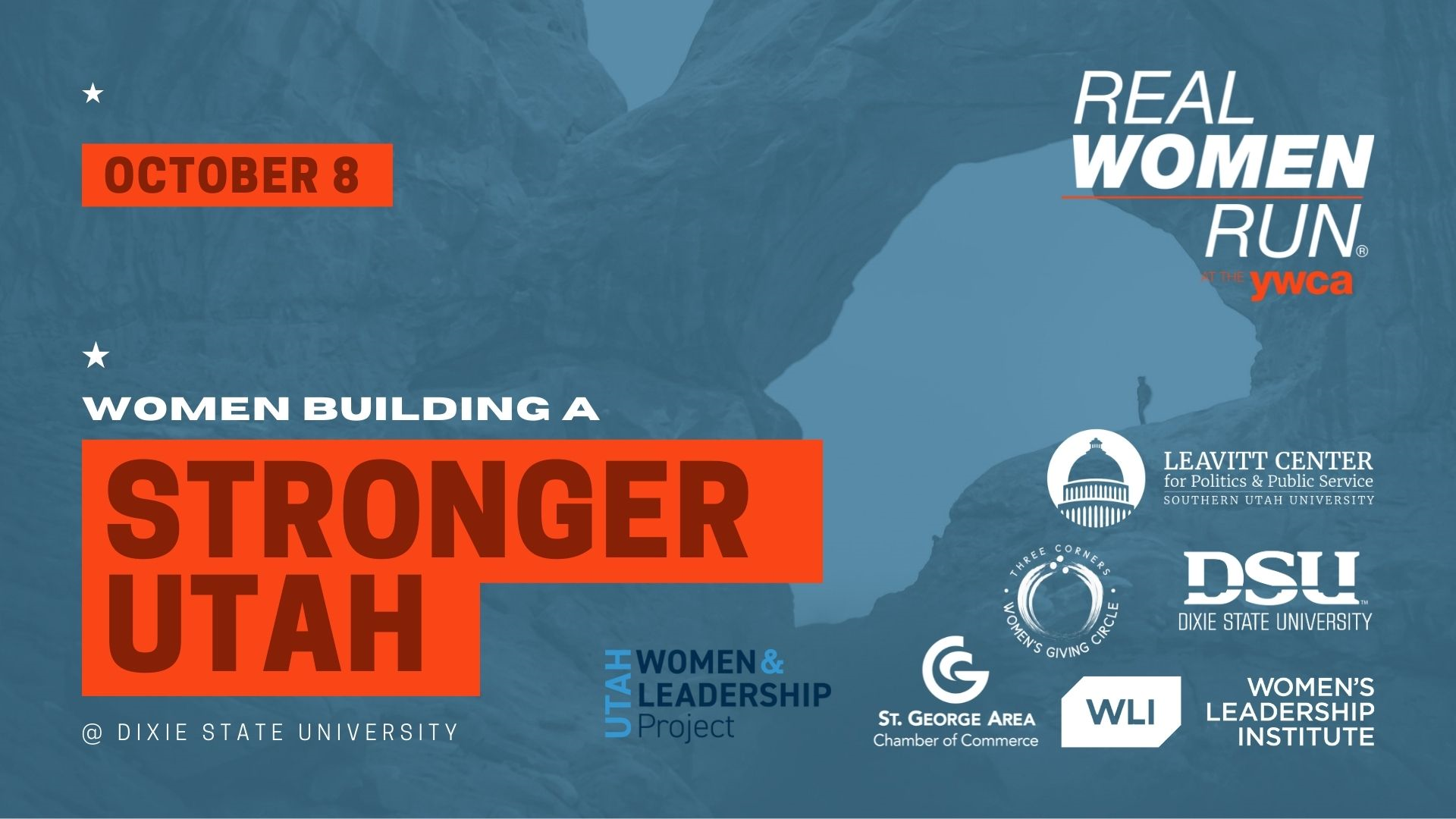 Join us for Real Women Run and the Women’s Leadership Institute’s Southern Utah event where we will inspire and train women to strengthen Southwest Utah by becoming more involved as community leaders at all levels. Lunch will be provided for those attending the event in person.  Hear from women in the Utah community as they share their experiences, tips for success, and more. This year’s lineup will include:

Registration will close on October 4th at 12 PM MT.

If cost is a barrier, please contact us at realwomenrun@ywcautah.org. Scholarship options are available.

The mission of the Women’s Leadership Institute is to elevate the stature of female leadership in the state of Utah. The organization was formed in January, 2015 through the visionary efforts of key business leaders to address Utah’s deficiencies in the presence of women at top levels of corporate and political leadership.

Jones was tapped as CEO because of her background and expertise in the business and political worlds as well as her ability to engage, collaborate and lead.

As co-founder and former President of Dan Jones & Associates, a successful public opinion and market research firm for 35 years, Jones helped lead and manage the company while serving on numerous community and company boards. Jones is an experienced and highly-regarded researcher, specializing in qualitative research, having conducted hundreds of focus groups throughout the country for a variety of industries since 1980.

Senator Jones served in the Utah Legislature for 14 years, serving in leadership positions 12 of those years. She was a member of the Utah House of Representatives from 2000-2006 and was elected to the Utah Senate in 2006-2014, serving eight years there, including serving as the first female leader in either party and in either House. While in the Utah Legislature, Jones was a member of various committees, including Public Education, Higher Education, Health and Human Services, Judiciary, Economic Development, Law Enforcement, Government Operations and Executive Appropriations.

Jones has served on the boards of United Way of Salt Lake, Zions Bank Women’s Financial Group, Utah Symphony and Opera, St. Mark’s Hospital, Hale Centre Theatre, Columbus Community Center, University of Utah Alumni Association, Coalition for People with Disabilities, This is the Place State Park, Utah Commission on Aging, and the Coalition for the Understanding of Substance Abuse Disease.

Pat Jones’ interests are many, but she prefers to move rather than sit. She enjoys exercising, biking, skiing, playing pickle ball, tennis, watching sports (especially basketball and football), reading, politics, cooking, having fun with her children and grandchildren and traveling. Her least favorite thing to do is to wait in long lines.

Patricia was married to the late Dr. Dan E. Jones and has four children and 11 grandchildren.

Maura Carabello is Founder and President of The Exoro Group, a recognized communications, policy and strategy group based in Salt Lake City, Utah, since 2002. Maura is an advisor and strategist to Utah’s top elected officials, non-profit change agents and business leaders. Her experiences span development work in Uganda, Time Magazine in New York, the director of several non-profits, as well as leading hundreds of regional, national and state campaigns and initiatives. Maura is a desired speaker, trainer, sought-after advisor and trusted problem solver. What is unexpected about Maura is that those seeking council are from both sides of the political spectrum, and from many different sectors of advocacy, policy and positions of influence. She is a regular guest on KUTV-CBS weekly podcast Take Two; PBS Utah Hinckley Report. As well as a frequent contributor on NPR and other news outlets. Her company publishes the definitive guide for the Utah State Legislature, as well as manuals for public engagement in the caucus/convention systems.

Maura has four principals that drive her work. Be the best you can be; pay attention to the details; do something that matters; and character counts. The power of advocacy and her deep desire to improve the world in which we live are what drive Maura. Exoro has led hundreds of campaigns, both issues and candidate, secured close to one billion dollars in public and private funding for clients, been in the center of complex policy discussions and highly controversial projects. Exoro gravitates to critical infrastructure, policy and the hard work of change. The best compliment Maura can remember is when a client said they choose to engage Maura because she had achieved the blending of respect and influence.

Natalie Gochnour serves as an associate dean in the David Eccles School of Business and director of the Kem C. Gardner Policy Institute at the University of Utah. She also serves as the chief economist for the Salt Lake Chamber. In these roles, she provides policy leadership that helps Utah prosper.

Gochnour’s experience includes a diverse mix of public service and business experience. During her public service, she advised Utah governors Norm Bangerter, Mike Leavitt, and Olene Walker. She also served as a political appointee in the George W. Bush administration, serving as an associate administrator at the EPA and counselor to the secretary at Health and Human Services. For seven years she led the public policy business priorities of the Salt Lake Chamber.

Gochnour has authored over 250 published columns in Utah Business magazine and the Deseret News and co-hosts the weekly public radio program Both Sides of the Aisle on KCPW.

She has been recognized by the Downtown Alliance, YWCA of Salt Lake City, South Valley Chamber, Friends for Sight, Girl Scouts of Utah, and other community-focused organizations for her service and example in the community.  Gochnour also serves the community by serving on the Utah Olympic Legacy Foundation, Utah Transportation Commission, O.C. Tanner, Altabank, and Primary Children’s Hospital boards. She is also vice-chair of Envision Utah and World Trade Center Utah.

Gochnour has both an undergraduate and master’s degree in economics from the University of Utah and specializes in and teaches public finance.

There are no upcoming events.